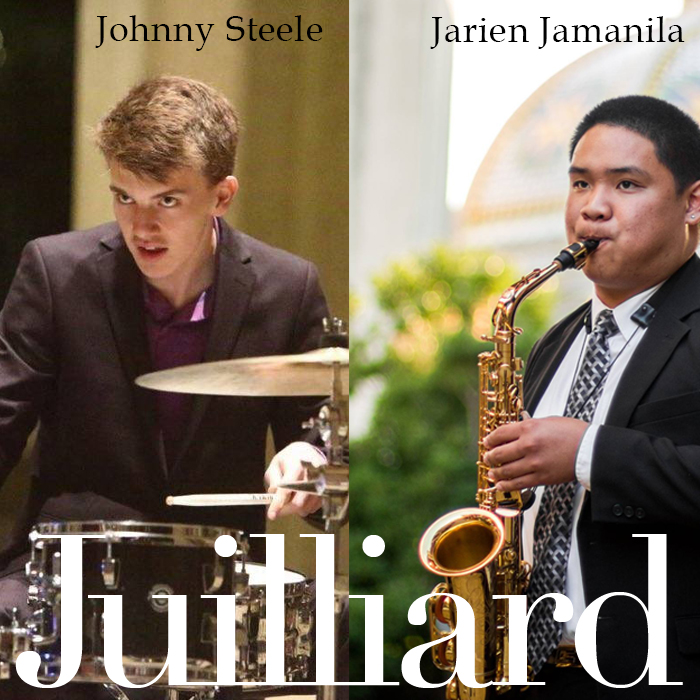 We are so excited to report that two of our students, one current, one former, have been accepted to the very elite Juilliard Jazz Program in New York City under the direction of Wynton Marsalis.

It has been a real pleasure to watch 16 year old Johnny Steele, drummer in Gil’s 9am class, apply to colleges this year.  He is a junior at The School of Creative and Performing Arts but will be graduating a year early to pursue his dream of studying music.  He was able to get all his credits to graduate early by attending summer school.  He applied to all the top Jazz universities and conservatories.  To apply he had to submit prescreening audition videos.  We all held our breath as he waited to hear which college had accepted the prescreening and wanted him to come in for a live audition.  University of Miami Frost School of Music wanted him to come in!  USC wanted him to audition!  Also Manhattan School of Music!  Berklee School of Music accepted him right off the bat and even offered him a nice scholarship. And, of course, Juilliard was interested as well as the New School, both in New York City.

Johnny and his parents Jen and Scott took a one week trip to New York.  Johnny had auditions scheduled for Juilliard and the New School.  Johnny had been practicing around 4 hours a day back in San Diego to prepare for these auditions.  He even located practice rooms in New York so he would be ready.  The big day came and the Steeles went to Juilliard to audition along with many other hopefuls.  Johnny auditioned and then had to wait an hour or so to see if he had made the first cut.  A list was posted on the wall.  Students checked the list – some walked away cheering, others walked away with shoulders slumped, their dream not realized. Turns out Johnny was one of eight drummers they were considering for 3 spots.

The Steeles came home from the trip and reported the news.  We waited on pins and needles for several weeks before finally hearing that Johnny made it into Juilliard!  The Steeles were so thrilled that they brought a cake to the IAJSD rehearsal to celebrate.  The cake read “Juilliard”

Jarien Jamanila has an equally amazing story of his path to Juilliard.  Jarien graduated from The School of Creative and Performing Arts last year.  He was the sax player in Gil’s IAJSD combo for 2015-16.  Last year he submitted a prescreening audition video to Juilliard and we were so thrilled when he was asked to come in for a live audition.  We were all really pulling for him because he is such a sweetheart and so talented.  Well, he came close, but in the end he was not accepted into the program.

He loved the Juilliard program and still had faith that he could make it.  He spent a year going to classes Grossmont College and practicing his sax every day.  His hard work and faith paid off.  He audition again this year and was offered a spot in the program!

These young men are so talented and work so hard.  They are both so deserving of this honor.  We are thrilled that they are going on to greater things.  But, boy, will we miss them!